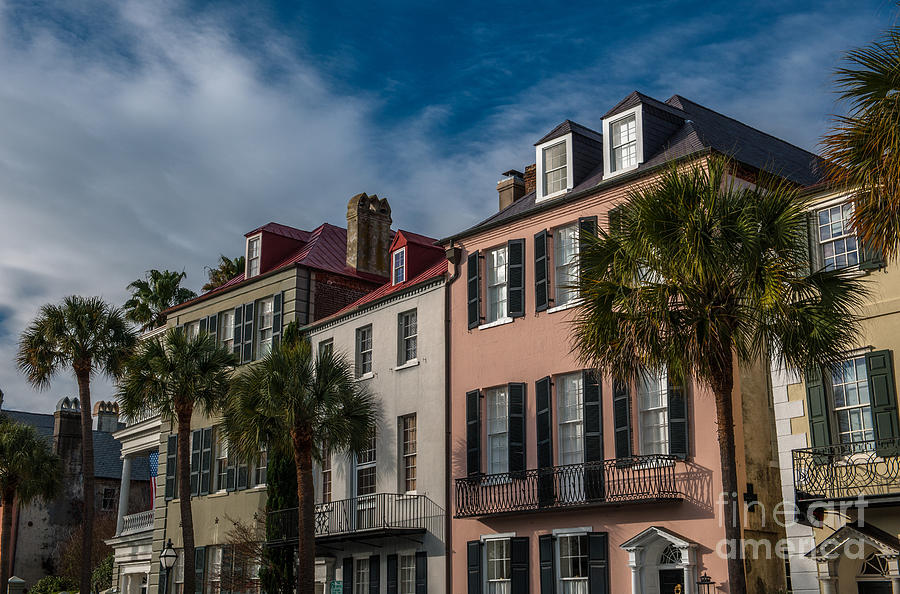 Rainbow Row is the name for a series of thirteen colorful historic houses in Charleston, South Carolina. It represents the longest cluster of Georgian row houses in the United States. The houses are located north of Tradd St. and south of Elliot St. on East Bay Street, that is, 83 to 107 East Bay Street. The name Rainbow Row was coined after the pastel colors they were painted as they were restored in the 1930s and 1940s. It is a common tourist attraction and is one of the most photographed parts of Charleston.

The buildings along Rainbow Row originally fronted directly on the riverfront of the Cooper River, but that land was subsequently filled in. Merchants constructed commercial buildings with stores on the first floor and living quarters above. Most of the buildings had no interior access between the first and second floors; exterior stairs were located in the yards in their rears. In 1778, a fire destroyed much of the neighborhood, and only 95 to 101 East Bay Street was spared.

After the Civil War, this area of Charleston devolved into near slum conditions. In the 1920s, Susan Pringle Frost, the founder of the Society for the Preservation of Old Dwellings - now the Preservation Society of Charleston, bought six of the buildings, but she lacked the money to restore them immediately. In 1931, Dorothy Haskell Porcher Legge purchased a section of these house numbering 99 through 101 East Bay and began to renovate them. She chose to paint these houses pink based on a colonial Caribbean color scheme. Other owners and future owners followed suit, creating the "rainbow" of pastel colors present today. The coloring of the houses helped keep the houses cool inside as well as give the area its name. By 1945, most of the houses had been restored.

Common myths concerning Charleston include variants on the reasons for the paint colors. According to some tales, the houses were painted in the various colors such that the intoxicated sailors coming in from port could remember which houses they were to bunk in. In other versions, the colors of the buildings date from their use as stores; the colors were used so that owners could tell illiterate slaves which building to go to for shopping.

Congratulations on being featured in the Fine Art America Group "Images That Excite You!"