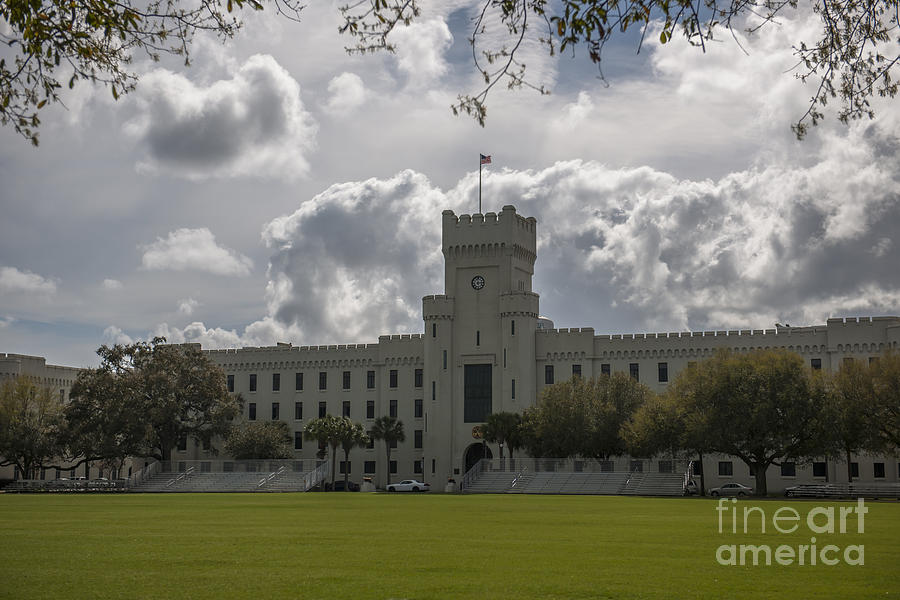 The Citadel, The Military College of South Carolina, commonly referred to simply as The Citadel, is a state-supported, comprehensive college located in Charleston, South Carolina, United States. Established in 1842, it is one of six Senior Military Colleges in the United States. It has 17 academic departments divided into five schools offering 19 majors and 36 minors. The core program consists of military cadets pursuing bachelor's degrees who are required to live on campus. The Citadel also offers 24 evening graduate programs, 7 non-cadet undergraduate degree programs, and both graduate and undergraduate online distance learning degree programs

The original Padgett-Thomas Barracks was constructed in 1922. It was designed by Lockwood, Greene Engineers of Atlanta with help from Coolidge and Shattuck Architects of Boston. It was the first building constructed on the new campus and, as such, had to house other facilities besides rooms for cadets. Plans from 1920 show first-floor rooms for the Literary Society, barbershop, carpenter shop, lumber room, infantry and artillery armories, quartermaster stores and game and recreation rooms.
The remaining floors were made up of 207 rooms that could house 438 cadets then. Cadet rooms in 1922 were much like they are today�plastered ceilings and walls and wood floors. There was one window in the outside wall and a door that opened to the gallery. A typical cadet room in 1922 was about 10 feet wide and 17 feet long.

Plans show that the designers had a much different idea in 1920 of what the building should be than what was built in 1922. Drawings show an 11-story tower rising 203 feet into the air. However, the tower was actually built to a height of 109 feet and eight stories. Inside was a water tank made of cypress boards surrounded by steel bands that provided reinforcement and helped keep the boards tightly together. Over the years, cadets found a way into the upper reaches of the tower and covered the tower walls and water tank with graffiti. Cadets are said to have gone for late night swims on hot, humid summer nights.

The new Padgett-Thomas Barracks is a replica of the original building. However, modern building materials have been used to ensure the building meets current construction and earthquake codes. At 112,335-square-feet, the barracks can house 560 cadets in 265 rooms.

Inside PT:
� 10,900 cubic yards of concrete�22,000 tons�was used in the construction.
� 361 pre-stressed concrete piles, each 65 feet, were driven into the ground to support the building. The tower is supported by 55 piles each 85 feet.
� The tower stands 109 feet tall and has a combined 314 steps divided between two stairways from the first and eighth floors.
� Cypress boards from the old tower cistern have been reused as paneling in the four tower meeting rooms. The grafitti from days gone by is still visible.
� 250 gallons of concrete stain was used on the quadrangle.
� 125 gallons of red paint and 125 galllons of white paint were used to create the signature checkerboard design on the quad.
� There are 425 windows.
� Most cadet rooms are about 10 feet wide and 18 feet long with red oak floors. That's about the same size as the rooms in the 1922 building.
� The first cadets occupied the new Padgett-Thomas Barracks on Aug. 2, 2004. Freshmen move in Saturday, Aug. 14.
The barracks is named after Col. J.G. Padgett, an 1892 Citadel graduate and 20-year veteran of the college's Board of Visitors, and Col. John Pulaski Thomas, who graduated in 1893 and also went on to serve on the college's governing board.
Famous former residents include Charleston Mayor Joseph P. Riley Jr., '64; Citadel Commandant of Cadets Brig. Gen. Emory Mace, '63; former University of South Carolina President John Palms, '58; Alvah H. Chapman, '42, retired chairman and chief executive officer of the newspaper publisher Knight-Ridder Inc.; U.S. Sen. Ernest F. Hollings, '42; former U.S. Attorney and Charleston lawyer E. Bart Daniel, '77.

Structural instability forced the closing of the original barracks in August 2000. The building was demolished in the spring and summer of 2001. Construction began in 2002.

The total rebuilding project cost is estimated at $28 million. Funding comes from a combination of state and federal dollars.

Padgett-Thomas Barracks will be dedicated on Friday, Sept. 24.

* The building's footprint is identical to the original 1922 barracks. The increase in square footage is due to construction of meeting rooms inside the tower. Previously the tower did not contain useable space.

Congratulations on your recent sale.

Thank You Buyer from Clermont FL for purchasing this Image

Thank You Buyer from Columbia SC for purchasing this Image

Thank You Buyer from Georgetown SC for purchasing this image

Thank You Buyer from Augusta GA for purchasing this image