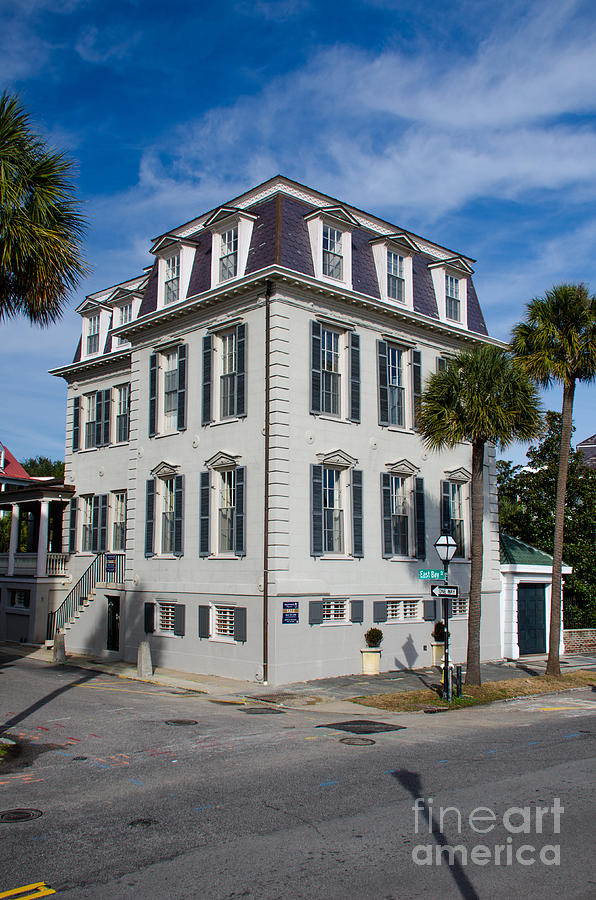 Two Water Street is a famous Charleston historic home. The three-story brick and stucco home built by the merchant Nathaniel Ingraham between 1810 and 1818. Unlike the rest of the houses also oriented to the harbor, the entry of this house faces Water Street. By the 1820s, Two Water Street and the newly built house next door were owned by William Burgoyne. Following this, Otis Mills, developer of the Mills House, bought both Two and Six Water Street.

During the Civil War, the property was shell damaged by the bombardment of 1864; major restorations were needed following the war. The original hipped roof was damaged, and replaced by the Second Empire mansard style that remains today. Dr. Edward Wells, notorious Confederate hero and writer, further changed to the exterior of the house: incorporating cast-metal cornice and window heads. Sabina Elliott Wells, the Newcomb Potter, was another famous tenant.

Over the last 20th century, aspects of the Federal style home have been reconstructed on the exterior and interior. Fortunately various pieces of the original interior d￿r have lasted; frame moldings, original Heart pine floors, Adamesque fireplace mantels, the cedar ceiling beams, and Venetian chandeliers. French doors open onto the Piazza from the kitchen, custom ironwork gate the driveway, courtyard, and garden. Paved bluestone and classical fountains lead to the grand pool. The kitchen, which was modified in 2007, is equipped with a 17th century marble sink. All the bedrooms have large windows opening up to the harbor.

Two Water Street stands out as one of the most stunning properties on the High Battery. The mansard roof, stucco facade and location on the corner catch the attention of those wandering down the Battery. It's luxuriously classical on the inside, while simple and satisfying to look at from the outside.

Congratulations on your feature in the Fine Art America Group "Images That Excite You!"

Congratulations, your work is featured on the homepage of "Created by Southern Artists

CONGRATULATIONS! Your WONDERFUL image has been FEATURED on the home page of "SHOWCASING THE SOUTH” L. Thank you for participating in the group. Please add the photo to the 2020 “FEATURED IMAGE ARCHIVE THREAD.”

Thank You Buyer from Richmond KY for purchasing this image