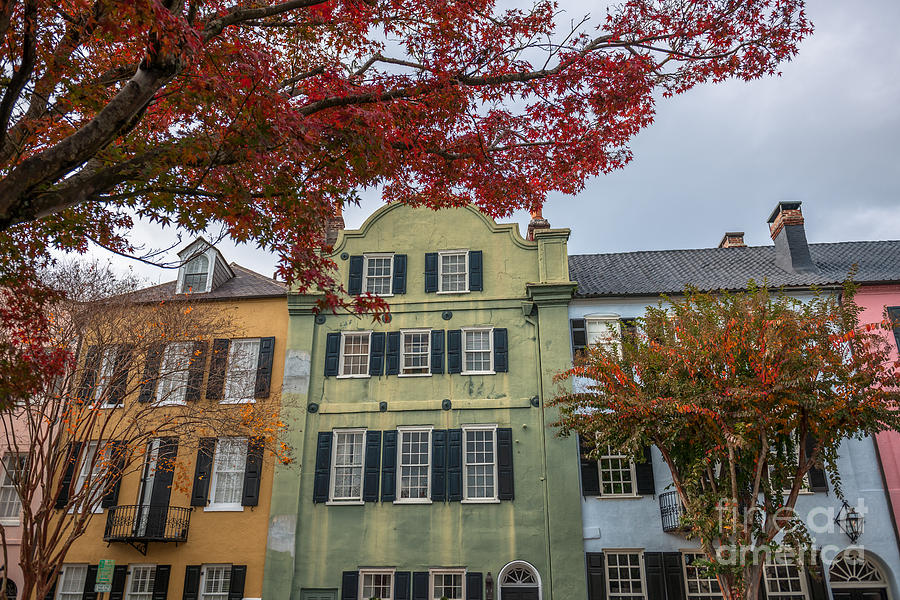 Fall Color in December in Historic Downtown Charleston SC at the Battery.

In 1931, Charleston adopted the country’s first Historical Zoning Ordinance– which helped citizens see the value of maintaining + protecting historical homes. That same year, Judge Lionel Legge + his wife Dorothy Porcher Legge purchased a section of the homes, from 99-101 East Bay Street. As they started renovating, they chose to paint the exterior of the houses in a bright, pastel pink– as a homage to the city’s Colonial Caribbean heritage roots.

Throughout the late 1930s + 1940s, others in the neighborhood decided to copy their style– also painting their abodes in bold, Caribbean colors as a way to improve the aesthetics + keep the houses cooler during the warmer months. It was this action that helped the stretch of homes earn the moniker “Rainbow Row.”

As it happens with most historic landmarks, Rainbow Row comes with numerous anecdotes about the original reason for the colors. But as far as history can tell– the stories that say the houses were painted brightly to point drunken sailors in the right direction, or those that state merchants used the colors to identify goods– are just that– stories.

The real reason behind the vibrant colors is a combination of the Legge’s choice to paint their house pink, their neighbors following suite to improve aesthetics, + as a way to keep the houses cool during the summer.